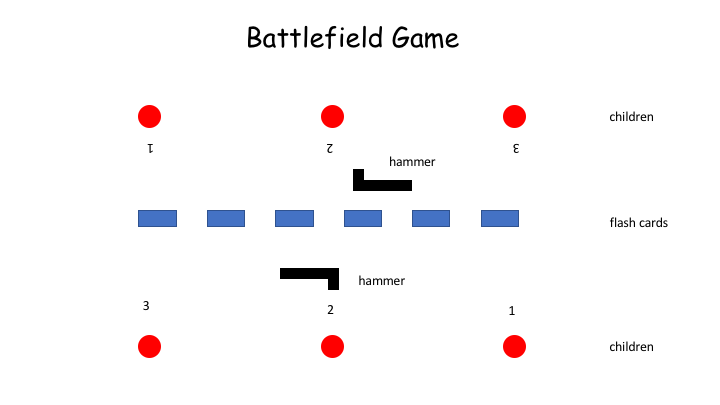 Battlefield is a simple and fun game for children to practice vocabulary, numbers, and even grammar. In passing, I note that I’m not a fan of the number of EFL/ESL Kindergarten games that have violent names or themes. But for some reason, that’s how things seem to be.

To play battlefield, children are seated in pairs on the floor, opposite each other, and in a line. (See the image, above.)  In front of each child is their number. I like to write them in ascending order on one side of the line, and descending order on the other. That is, children sitting opposite each other don’t have the same number. Vocabulary flash cards are set out down the middle and there are two hammers like these in the middle. (Here’s my full list of EFL/ESL Kindergarten toys and props you can buy at Amazon.com.) The teacher calls a number, and the child who is that number, races to hit the flashcard that is called.

You can use the grammar structure, by having the children chorally ask you the question. For example, ‘how are you?’ and you respond ‘I’m happy’, along with the number of the child. Those two children would hit the ‘happy’ card.

Some of the things you might want to information check that children are not to do during the game, include hitting the card multiple times, not smashing the hammer down (to increase the longevity of your tools), not hitting yourself or other kids with the hammer, and not touching the flash cards or rubbing out their numbers… as they will try to!

Also, because I don’t like to have any overtly competitive win/lose games in any of my classes, I never score such games, and I wait for both children to hit the flash card before moving on to the next round.

One of the challenges of this game occurs where you have a lot of children. Even though they’re hearing the vocabulary (and possibly using) the grammar structure, you don’t want them sitting around waiting for a turn. For that reason, I tend to be the teacher, instead of rotating the teacher role to a student. It means that I can cycle through vocabulary more quickly, focus on the words they are challenged with (and might otherwise avoid), and equally, although somewhat randomly distribute turns among students to keep them aware and focused. (For example, I might choose the same number two or three times in a row to keep the kids aware.)

In closing, I note that I’ve deliberately left out discussing a powerful tweak to this game, which I want to share in the next post.